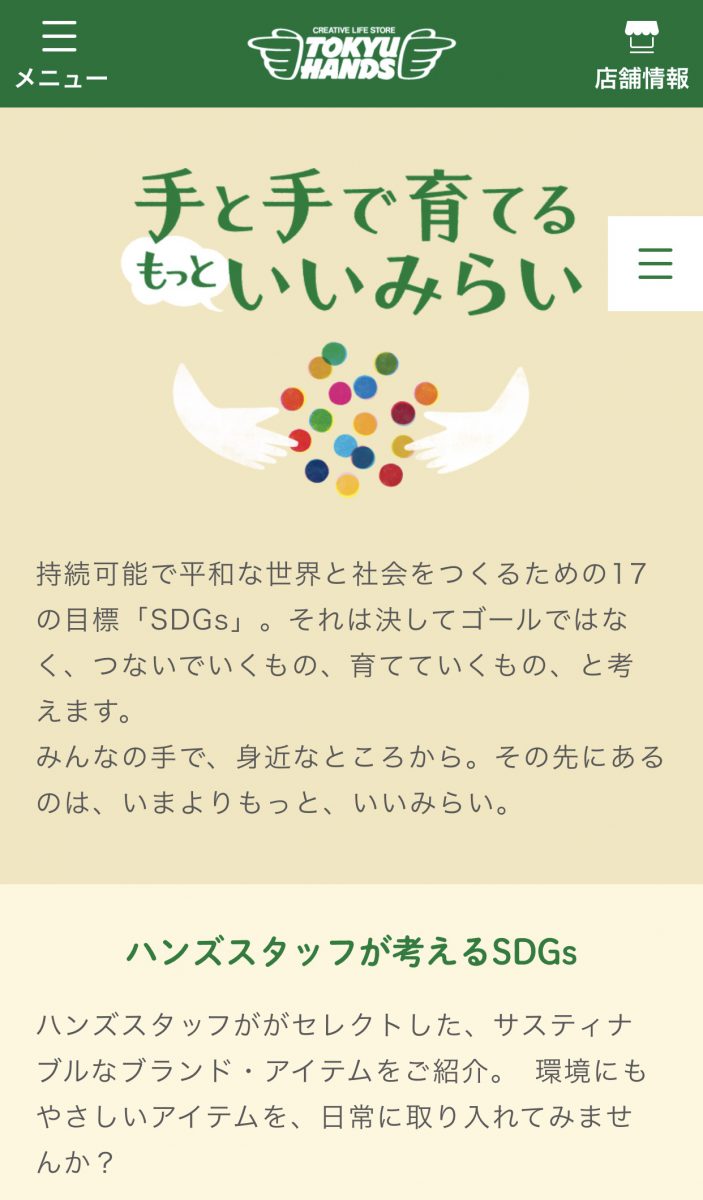 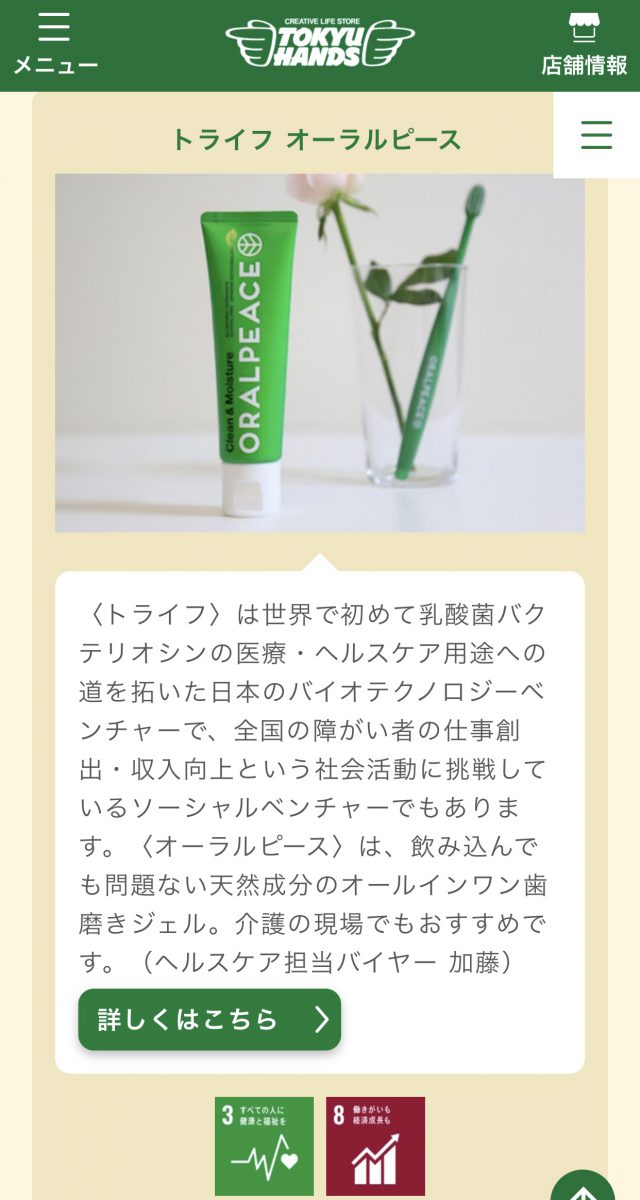 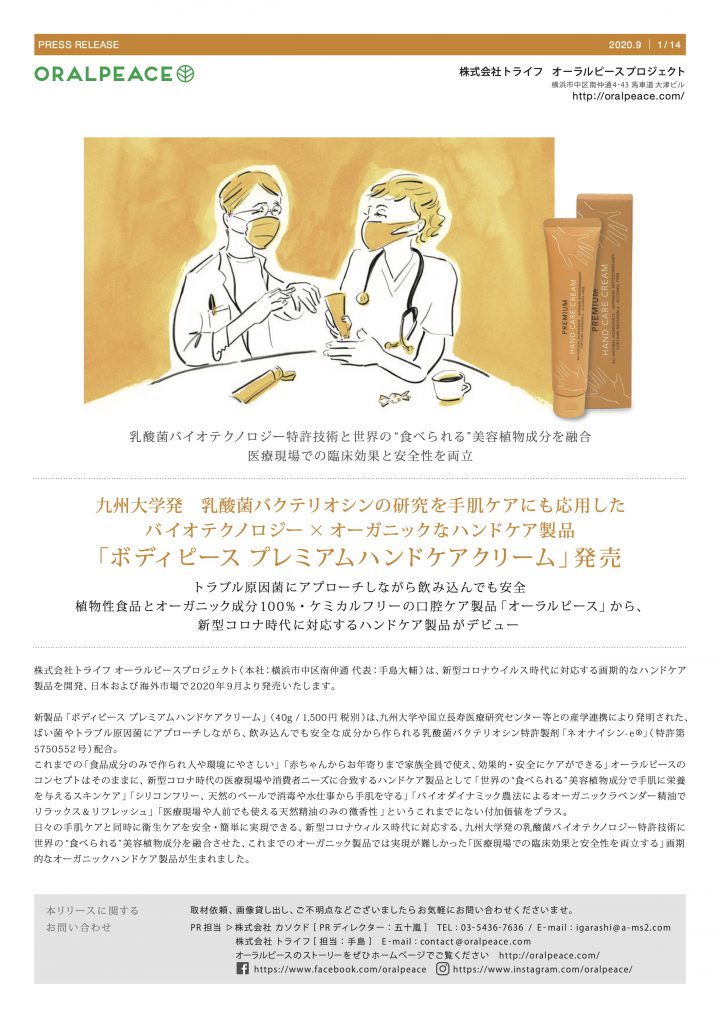 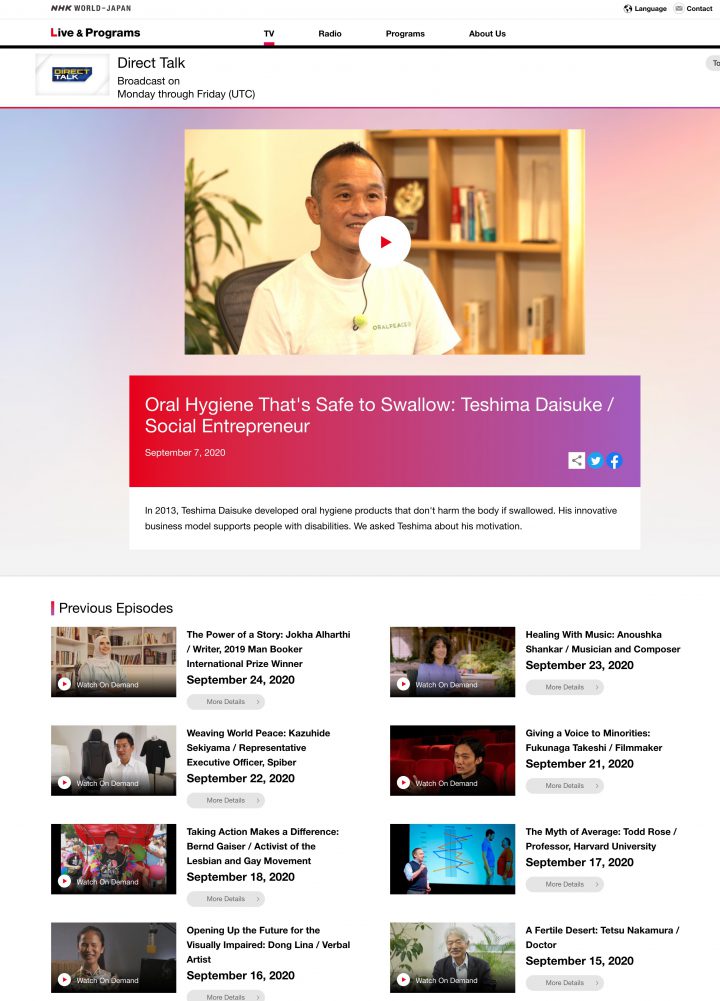 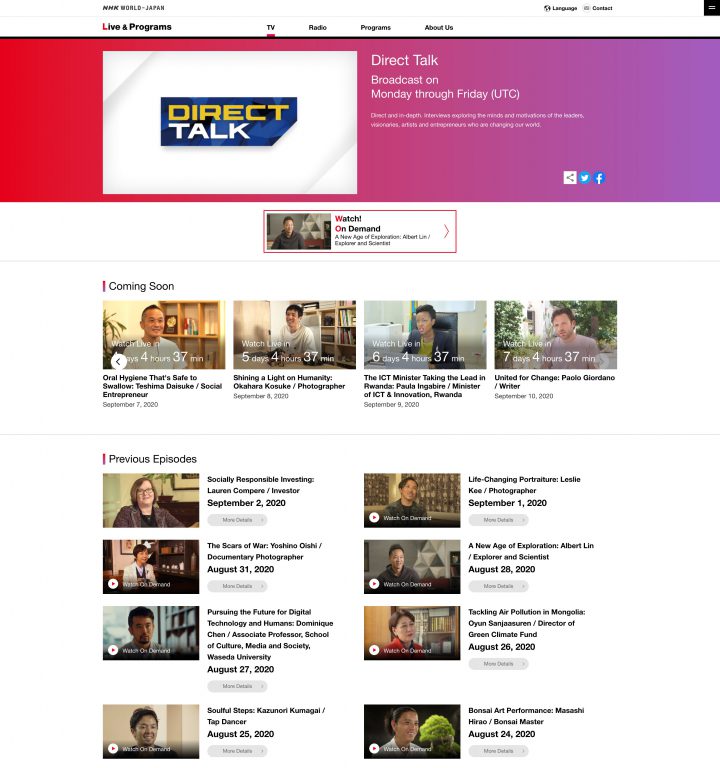 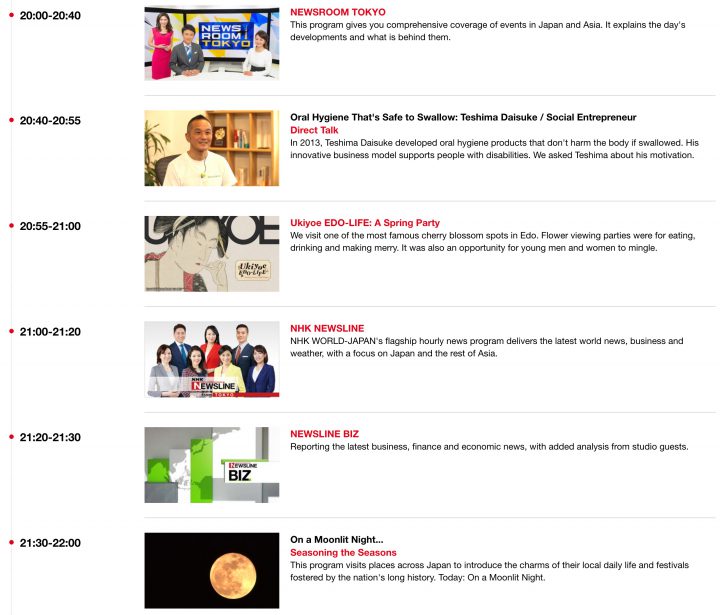 0m 09s
Our guest today is social entrepreneur Teshima Daisuke. His oral hygiene products can be used without water, and are safe to swallow. They’re perfect for elderly people confined to their beds. Or for disaster zones, where water isn’t readily available. Teshima’s business model is also receiving attention for offering a new kind of employment. He spoke to us about the philosophy he applies to his work.

0m 50s
We should all preserve individuality, and help each other out. If we all work together, I think we can create all kinds of new things.

1m 02s
At the core of Teshima’s venture business is an oral hygiene gel called Oralpeace. One tube costs around 1,000 yen, or about 10 US dollars. It uses all-natural ingredients that don’t harm the body. The gel is effective against certain pathogenic bacteria, an important part of oral care. But even if it’s mistakenly swallowed, it doesn’t cause any negative effects. We visited a shop selling the product.

1m 38s
Lots of people who buy it become repeat customers. Parents often ask for a toothpaste for their children. They want something that’s safe even when swallowed.

2m 00s
If you swallow a regular oral care product, the synthetic disinfectants they contain would have a negative effect on good bacteria in the body. This could cause digestive problems. Our product is safer for people who can’t gargle or spit. It’s useful for elderly people confined to their beds, people with physical impairments, and infants, as well as people in disaster zones who don’t have access to water. Even if a user does spit it out, the product is biodegradable, so it doesn’t harm the environment.

3m 05s
Over 8,000 facilities aim to offer employment, but they frequently don’t have enough work. They make products, and sell them. But their wages aren’t very high. The important thing is to create work, giving people with disabilities the means to be part of society in a rewarding way. It’s great for their families, and for the people receiving deliveries, too. It creates such goodwill. It’s not just regular buying and selling. It’s more than that. There’s something about it that’s truly heartfelt. That feeling of goodwill is mutual. We’re supporting each other. Our staff get that, and their families too. I think it has a positive effect on society.

3m 59s
Behind the development of Teshima’s product is a dramatic tale involving his family. Before starting his own business, Teshima worked at trading and consulting companies for many years.

4m 17s
My grandfather worked in international trade. And I think that’s the reason why I wanted to work on a global scale. Throughout my career, I have constantly researched ways to gain an edge over other companies, and ways to succeed as a business.

4m 37s
Teshima worked hard, day after day, and built up an admirable career. At the age of 30 he got married, and one year later, he became a father. But something happened that no-one could have predicted.

4m 57s
When my son was born, the right side of his brain was damaged by cerebral thrombosis. This led to paralysis on the left side of his body. A disability. Until that point in my life, I had always thought that my dreams and ambitions would come true. That is, if I just tried hard enough. But when it came to my son’s disability, I had a realization that it was something that I couldn’t just solve through sheer effort alone. That came as a big shock to me. It was something I had never experienced before, and I really struggled with it.

5m 41s
Teshima worried about his son’s future. He began researching what life was like for disabled people in Japan.

5m 52s
Around eight million people in the country have a certified disability. A monthly wage is available for those who can’t work at a regular company. They work full time for 20 days a month, and are paid around 15,000 yen. A pension is also available, which is around 60 to 90 thousand yen. Even so, their monthly income rarely exceeds 100,000 yen. That’s a real problem, especially when their parents pass away. It’s not enough for them to achieve financial independence. So parents are constantly worrying about what they’re able to leave behind for their children after they’re gone. It’s something that really weighs heavily on their minds. In all honesty, I had no idea what to do.

6m 43s
Over time, as he raised his son, Teshima arrived at a new point of view.

6m 52s
I realized that everybody has something that makes them unique. Before then, I was always striving to hit a certain benchmark set by people around me. Whether it was a high score in a test, or high sales figures. I thought people were like fish, all swimming in the same direction. But that’s wrong. Some people swim backwards, or upwards. Everyone’s different, which is great. If someone can take their individual characteristics and put them to use, that’s a really good thing for them. I thought that approach would be a great way for me to live my life, too.

7m 36s
In 2005, Teshima quit his job. He founded a volunteer group, which gave employment assistance and donation-based aid to people with disabilities. To cover its operating costs, he started an Italian-made organic cosmetics brand. But trouble lied ahead.

7m 59s
The financial crash of 2008 caused all sorts of problems. Our Italian partner company went bankrupt. The business I’d built up was essentially wiped out by that event. I was absolutely penniless! The fridge was empty. I carried on volunteering, but I couldn’t afford the train, so I traveled by bike.

8m 27s
Teshima kept himself afloat by doing consulting work and lectures for companies. But another shock lay just around the corner. His father was diagnosed with stomach cancer. And the cancer treatment caused unforeseen problems.

8m 48s
His weakened immune system led to all sorts of symptoms, including fungal infections in his mouth. At this hospital, he was given a medicine that would sterilize those infections. He was supposed to gargle it, and spit it back out. But his body was so weak that he accidentally swallowed it. The medicine was intended for bacteria in the mouth, but it ended up killing bacteria in the body. As a result, he experienced digestive issues. That’s when something occurred to me.

9m 24s
When Teshima was involved in the cosmetics industry, he obtained valuable information from a Japanese university. A natural antibacterial agent could be made using plums, and a byproduct of tofu making called okara. Teshima thought he might be able to make use of that agent to create a new oral hygiene product.

9m 53s
At that time, all my ideas started to come together. On one hand, I wanted to create some kind of work for people with disabilities. I also wanted a product that filled a need in society. Right now, Japan’s population is aging. Many people are suffering from the same problems as my father. For those who can’t gargle or spit, a new antibacterial agent would be very valuable.

10m 24s
In collaboration with the university, Teshima reformed the antibacterial agent. They removed its original salty taste and changed it to a more suitable, refreshing flavor. A year later, in 2013, he succeeded in creating an oral hygiene product that’s safe to swallow. He began selling it under a new business model, using employment facilities for disabled people as distributors.

10m 56s
They buy it from us for 650 yen per item, and sell it for 1,000 yen. That means they make 350 yen of profit per tube. Before that point, disabled workers would be making just one yen for doing work like making an envelope or crushing an aluminum can. They were paid extremely low amounts. Selling just one tube equates to crushing 350 cans. As a result, it creates lots of opportunities. It’s not just an oral care or oral hygiene product. I thought it was also a message, one that’s carrying real value. It doesn’t only address problems pertaining to disabled people. These are universal issues, ones that are shared by billions of families. I wanted my product to become a symbol of mutual support.

11m 54s
Teshima was proud of the revolutionary product he had created. But at first, business was worryingly slow. Then, his company started appearing in newspaper and magazine articles. And after a year, sales had risen to nearly ten million yen a month.

12m 19s
Facilities for disabled people nationwide began helping us sell the product. At the moment, around 3,000 people with disabilities are working with us. When we compared the amount of product shipped to the amount of product sold, over seven years, there has been 30 to 40 million yen in profit. That profit has in turn been shared between members of the workforce. One member of staff, who used to make 14,000 yen a month, now makes more than 100,000 yen. In some cases, sales activity has led to people selling homemade cookies and other items at regional care homes for the elderly. I think it has increased regional communication and understanding, leading to brighter communities.

13m 10s
Teshima’s success was acknowledged by the Japan Venture Awards, who presented him with their top prize. Since 2016, he has been expanding the business overseas.

13m 25s
Our products are sold in Hong Kong, Taiwan, China, Malaysia, and Singapore, as well as Mexico, Guatemala and the United States of America. From next year, our goal is to manufacture our products in those places. It’s not just about helping people in Japan. Making and selling products in the same region supports the community. I want to expand that model to the rest of the world.

14m 07s
“Try our life.” It means keep trying, no matter what. In our lives, we all face hardships and difficulties. We all deal with barriers, or obstacles we have to cross. And by overcoming them, we can each find value and meaning in our lives. My family story has given me all sorts of insights into life. And thanks to the support of a great many people around me, I’ve been able to take the business this far. If each of us, in our individual lives, faces up to the challenge, together, we can overcome the larger barriers that lie in front of us. That’s what I believe. 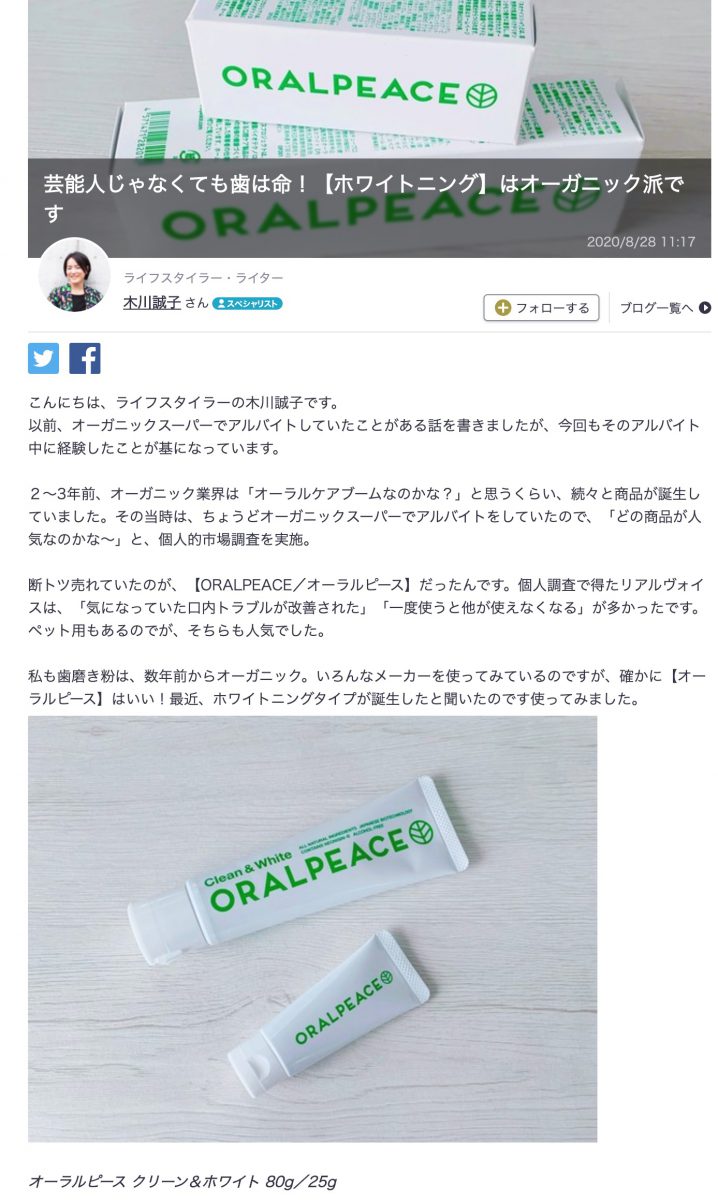 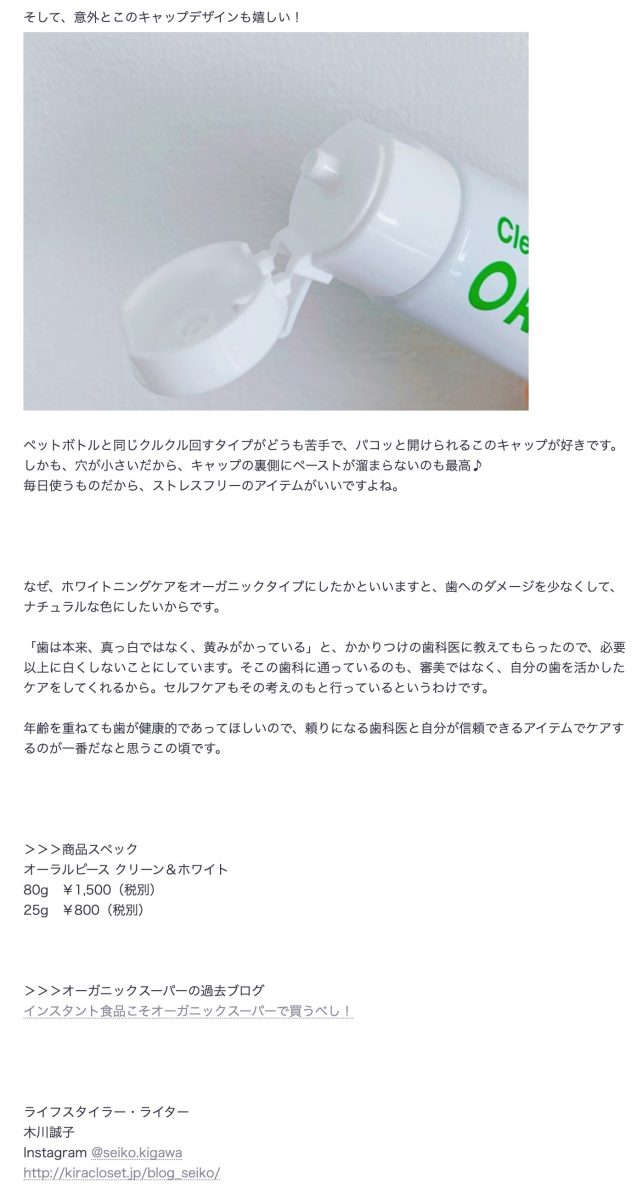 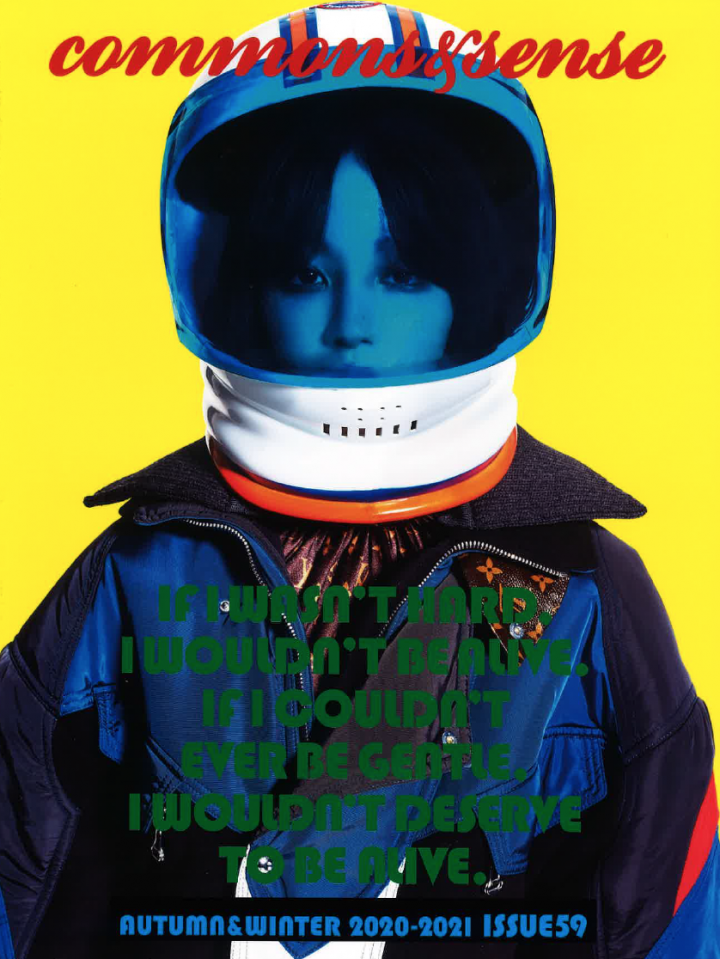 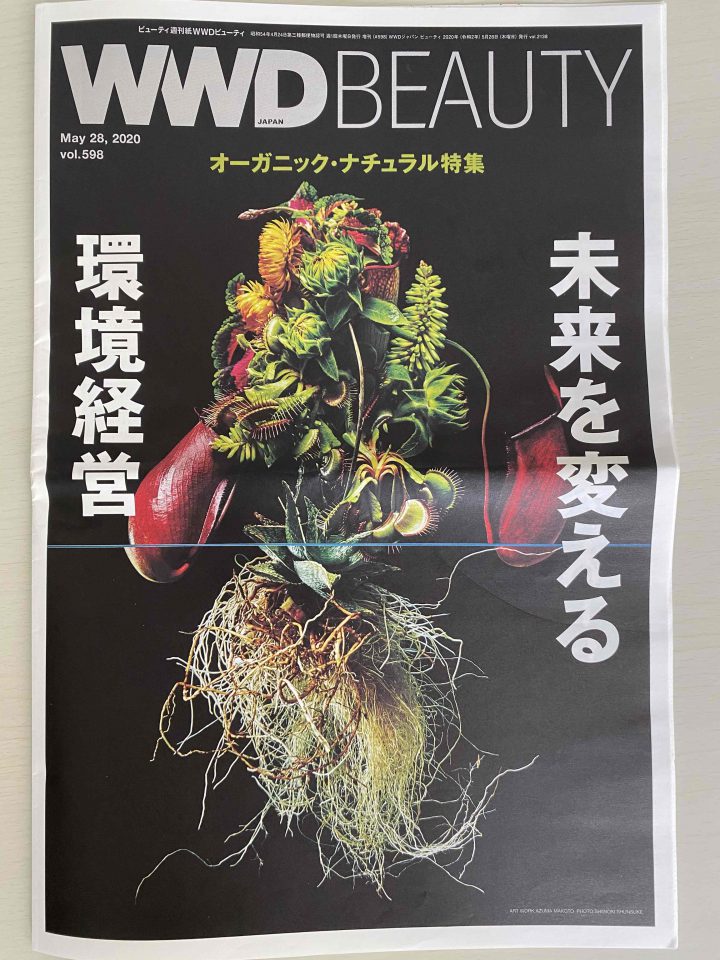 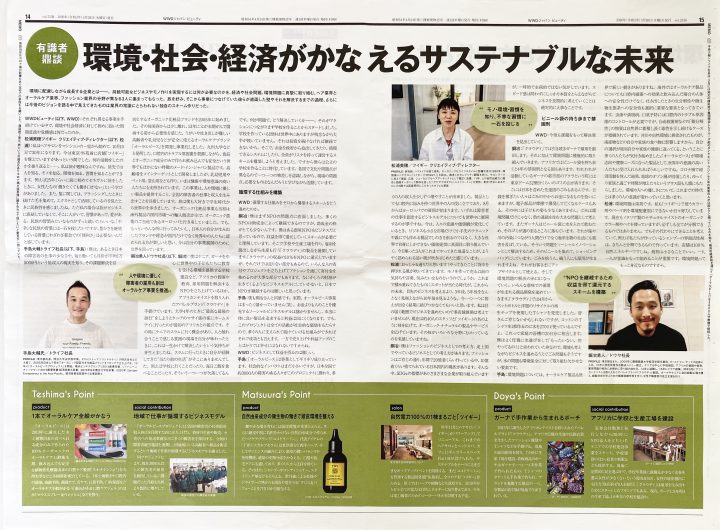 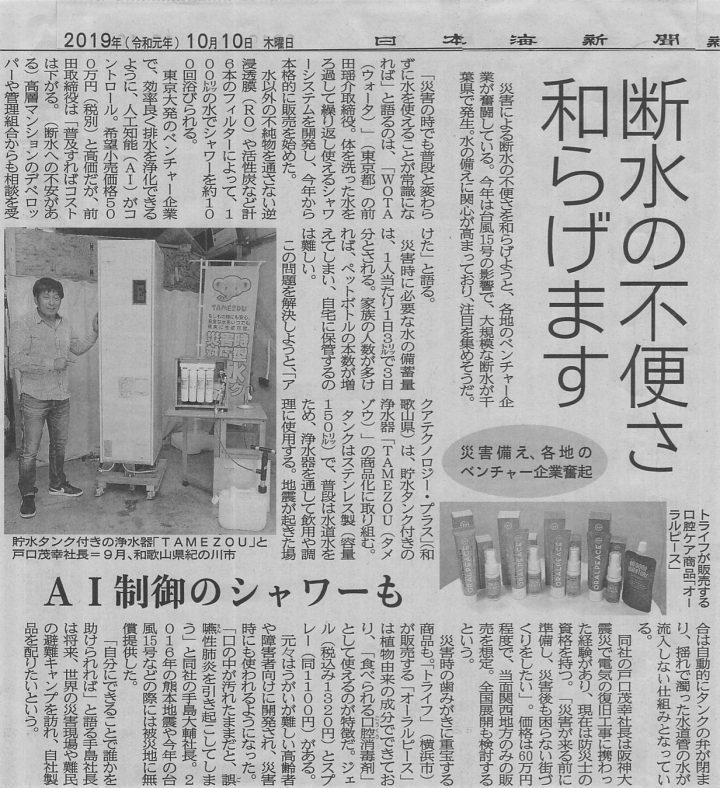